With the announcement that Med Rep Meeting (Med Rep) and LeasePoint Funding Group (LeasePoint) have partnered to launch Med Rep Financing, medical representatives are now able to prescreen and prequalify physicians for up to $350,000 of medical aesthetic devices before a meeting. Medical reps also have the ability to know the reasons for a disqualification […] LeasePoint Funding Group provided more than $50 million in new medical equipment funding in 2021, marking a 200% increase compared with 2020. The company expects its sales and operations teams to double in size during Q1/22. “We’ve built a proprietary origination platform that automates the underwriting and funding process. Our focus is speed and simplicity,” […] Joshua Pike, a veteran in sales leadership with more than 15 years of experience leading teams at Xerox, joined LeasePoint Funding Group as director of sales. Having started out as an account executive at Xerox, Pike worked his way up to become vice president of sales, overseeing sales teams of more than 100 people with […] 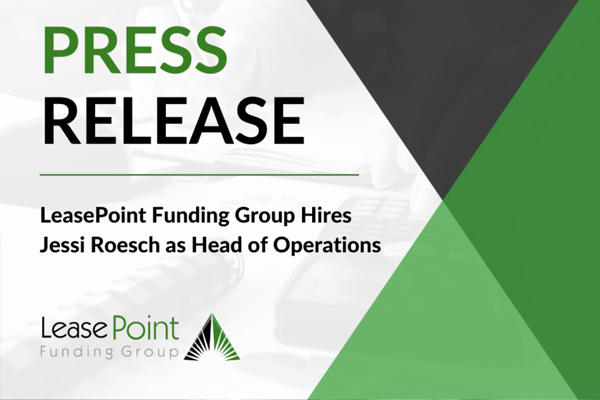 LeasePoint Funding Group, a provider of equipment finance solutions for medical and business professionals, hired Jessi Roesch as its head of operations. “Jessi brings an impressive and diverse background in operations, credit analysis and leadership. Her track record of scaling operations and infrastructure will play an integral role in our growth. LeasePoint effectively doubled in […]

Speak to a finance professional now.

Send us a message and we’ll email you an answer within a few hours.

Let’s have a conversation about your needs and goals